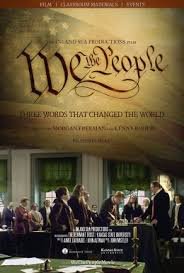 From men who would defy a king – to a man who would not let the “more perfect union die – to women who struggled for equality, We the People delivers through the giant screen a powerful national self-reflection and inspires every citizen to uphold the ideals and truths of our Republic – tenets that so strongly influence all our daily lives.

Narrated by the iconic voices of Morgan Freeman and Kenny Rogers, We the People is meant to engage and inspire its audience to learn more about and participate in our democracy. The nation’s finest constitutional scholars, augmented by a non-partisan committee of prominent Americans, have overseen the making of this film.